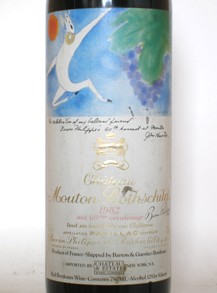 "Opaque purple-colored showing absolutely no signs of lightening, Mouton's 1982 is a backward wine. Still tasting like a 4-5 year old Bordeaux, it will evolve for another half century.

At the Philadelphia tasting, it was impossibly impenetrable and closed, although phenomenally dense and muscular. However, on two other recent occasions, I decanted the wine in the morning and consumed it that evening and again the following evening. It is immune to oxidation! Moreover, it has a level of concentration that represents the essence of the Mouton terroir as well as the high percentage of Cabernet Sauvignon it contains.

Cassis, cedar, spice box, minerals, and vanillin are all present, but this opaque black/purple Pauillac has yet to reveal secondary nuances given its youthfulness. It exhibits huge tannin, unreal levels of glycerin and concentration, and spectacular sweetness and opulence. Nevertheless, it demands another decade of cellaring, and should age effortlessly for another seven or eight decades.

I have always felt the 1982 Mouton was perfect, yet this immortal effort might be capable of lasting for 100 years! Readers who want to drink it are advised to decant it for at least 12-24 hours prior to consumption. I suggest double decanting, i.e., pouring it into a clean decanter, washing out the bottle, and then repouring it back into the bottle, inserting the cork, leaving the air space to serve as breathing space until the wine is consumed 12-24 hours later. The improvement is striking. The fact that it resists oxidation is a testament to just how youthful it remains, and how long it will last. Anticipated maturity: 2010-2075." Robert Parker 100, June 2000

Get first access to hard-to-find, inexpensive, high-rated wines at 30% off!

Get advice from our experts about buying, serving, storing and drinking fine wine…

The Source
For Wine Review