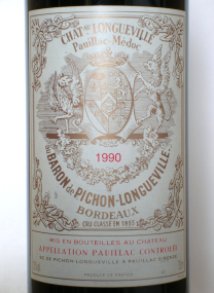 "One of the finest values in top-class Bordeaux has been the 1990 Pichon-Longueville-Baron. Until 3-4 months ago, the wine could have been purchased for under $400 a case, but that seems to have changed as the results of numerous tastings have pushed the price upward. I originally gave a one point preference to the 1989, and I am still convinced that ultimately that wine will last longer and hit a higher peak of pleasure than the 1990, but, wow, the 1990 is showing great. Both the 1989 and 1990 vintages exhibit opaque, dense purple colors that suggest massive wines of considerable extraction and richness. The 1990 Pichon-Longueville-Baron exhibits more of the roasted overripeness of this vintage, but it manages to keep everything in perspective. The wine is opulent and flamboyant, with lower acidity, and noticeably less tannin than the 1989. It is equally concentrated, with a more evolved nose of cedar, black fruits, earth, minerals, and spices. On the palate, the wine offers sensational quantities of jammy fruit, glycerin, wood, and sweet tannin. It is far more fun to taste and drink (more hedonistic perhaps?) than the more structured, backward, yet exceptional 1989. Ideally, readers should have both vintages in their cellars. The 1990 can be drunk now as well as over the next 25+ years." Robert Parker 96, February, 1997

Get first access to hard-to-find, inexpensive, high-rated wines at 30% off!

Get advice from our experts about buying, serving, storing and drinking fine wine…

The Source
For Wine Review